Its quince season here in Paris (October – December). Quice originate from the Caspian sea banks and has been cultivated as early as 4000 BC. It comes from the quince tree (no kidding) and the fruit looks like a big pear. Raw it is sour, very hard and has a strong scent.
The Greeks would eat quince with honey and the Romans used it to make perfume. It has sevral medical virtues mainly related to the intestins and as anti sceptic. In the very famous book from Cervantes (that I recommend to read if not already done), Don Quichote advises Sancho Pança some slices of quince to ease his digestion!

So I had about 2.5 kg to prepare for the freezer. We eventually de-freeze and cook quince dices to make quince paste (great with cheese) and jelly.

Quinces being pretty hard, after cleaning the skin and drying them, I had a rather tough job ahead. I had done this already and had some hands-on experience so wanted to test alternatives. I made a selection of heavy duty fix blades and folders in order to figure out which would turn out being the best fitted for the job.

1. Spyderco’s Para Military 2 (folder)
The length of the CPM S30V blade is well adapted to the size of the quince.
The full flat grind reduces any drag during the cut; solid compression lock – no surprises.
Working with the tip enables to get rid of each quarter of the core. The handle being skeletonized for weight consideration, blisters can appear when having to prepare much more quinces. This is what I was referring to as “hands-on” experience last time I prepared quinces  but in much greater quantities (+6 kg). The job was completed at good pace; you can see this on the picture based on the degree of oxidation (not too much). 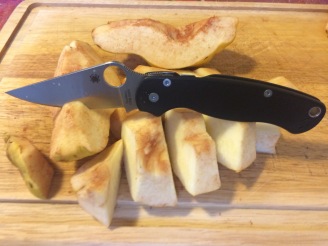 2. Spyderco’s Alcyone (folder)
Similar behavior to Para Military 2 as it also features the full flat grind blade.
The CTS BD1 Stainless steel blade being a bit smaller, its not always possible to split the quince in halfs in one go. On the other hand, working to remove the each quarter of the core is a bit easier as the blade is shorter. The liner lock is very solid. 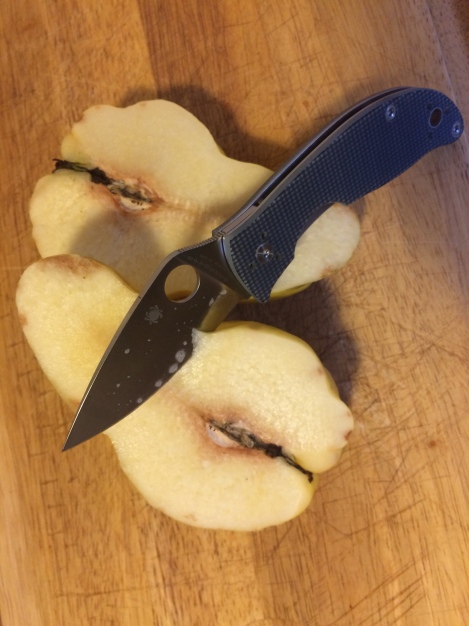 3. Philippe Perotti’s Commander (fix)
Longest blade; flat saber grind N690Co. Cutting in quarters was easy but I spent more time to extract the core. Again the oxidation intensity enables to reflect the increase time vs the folders. However the full grip is much more comfortable when performing heavy duty repetitively and for a long time. 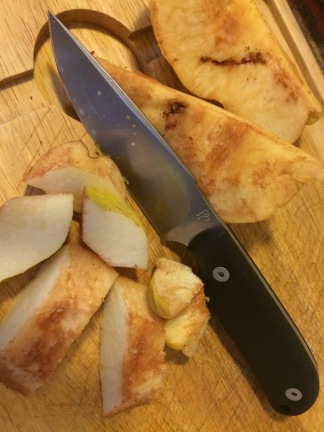 4. Morakniv Pro C (fix)
Sweedish carbone steel. Has an optimized handle made of TPE rubber; comfortable grip that does not conduct the cold. Low price.
Surprisingly something unexpected happened to the extent of having to cease the test once I realized what was happening. First cut was easy but I immediately noticed black streaks on the quince. First reaction was to clean and dry the knife but that did not address root cause. So I continued and the quince was continuing to be tainted black; I guess its the carbon. On the blade a patina was rapidly developing. Hence STOP as this is a knive Nemo lended me to test!!
So there is a chemical reaction here and I have not yet identfied what combination of chemical elements are responsible for the rapid stains & patina. 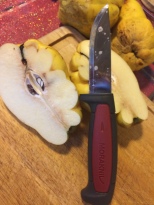 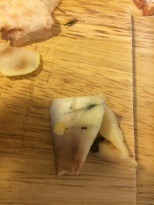 I tested with a pear as it resembles and the constituants seem similar but I did not observe the same behavior; searching for the differences! 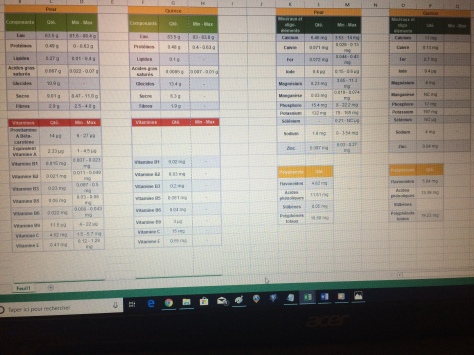 And the winner is…

So the test has been very instructive even though at this time I could do with a chemist to help with the full explanation.
As far as reducing the quince in dices, the winner for me is the Para Military 2. As I did not have a huge quantity to do I did not get the blisters. However if I had more, I would use a combination: PP Commander to cut in quarters and Para Military 2 to work the core.

Now I will taste the paste! Yum…

3 thoughts on “Pear of Cydonia”