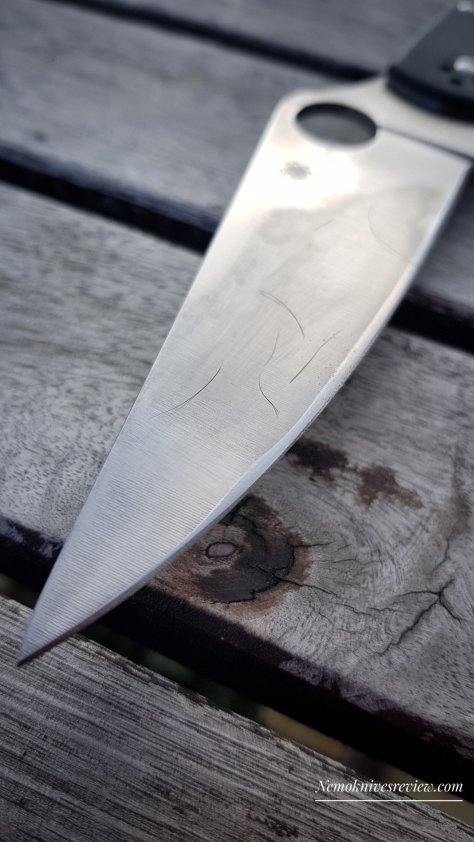 I have seen a video where someone is stabbing concrete with its Spyderco Police 4 to show how K390 is strong ! The blade of that famous knife is thin and this thinness is here for a purpose: Sal Glesser has decided to use the Police 4 plateforme according to his own desire but toughness and impact resistance may have weighed in on the decision. For once the Police is not especially aimed at the LEO but those ELU who use their thin knives hard !

“We make quite a few designs for the Law Enforcement market at this time, so the design for Police use is necessarily the case anymore, like it was in 1984. I designed the Police 4 to include what I would like in a knife, more than what a LEO might like. It’s still a kissing cousin, and large for most people. I widened the blade, enlarged the hole and selected a steel that I like to use. The design’s success in the marketplace is unknown at this time. But I get to have one. ” Sal Glesser.

K390 is not stainless. It’s a cold work tool steel which uses Bohler proprietary Microclean technology.  K390 has close to the same edge holding as A11 but is much tougher. Bohler’s third generation particle metallurgy contributes to the toughness of the steel.This steel will be hard to grind, finish and sharpen. Once it is sharp it will stay sharp for a long long long time. It’s CPM M4 on steroids which means K390 has more strength, durability, stability and wear resistance than M4 ! And I do love CPM M4.

Here is a video which confronts CPM M4 and K390:
https://youtu.be/TI53ziibeiQ

“K390 is quite simply the powder metallurgical cold work tool steel with the best properties for cold work applications available from BÖHLER at the moment. K390 MICROCLEAN was developed to meet the demanding wear resistance and compressive strength requirements of cutting, blanking and punching applications, for cold forming applications and for parts which are subjected to abrasive wear in plastics processing. Tool life can be increased by several hundred percent due to the outstanding wear resistance, high compressive strength and good toughness of BÖHLER K390 MICROCLEAN. These material properties enable our customers to make their production processes more efficient and consequently to reduce the price per part produced. Too hard to be machinable? Quite the opposite. The task of the tool steel manufacturer is to produce a steel which is, on the one hand, easy and economic to machine (with a hardness of around 280HB) and simple and unproblematic to heat treat, but which, on the other hand, has a very high hardness (up to 64HRc) and optimum performance in use. The secret lies in the powder metallurgy process. A very fine, homogeneous microstructure guarantees optimal machinability.

K390 owes its superior properties above all to the powder-metallurgical production process. The main advantages of BÖHLER MICROCLEAN steels over conventional steels are: • uniform carbide distribution • small carbide size • uniform chemical composition over the entire cross-section and length • virtually isotropic behaviour due to improved homogeneity and the absence of segregations.”

From Phil Wilson on the Spyderco Forums.:
“I have been using K390 from the start ever since it was introduced by Bohler and I got some small samples to try. A bit of history is that it is the European version of CPM 10V but not the exact chemistry (about 1% less V plus small addition of a few others). That is because the CPM 10V chemistry was protected by patent at the time. If you check the K390 data sheet it claims that the bit less V gives K 390 a little boost in impact toughness. It also can be heat treated at a lower temp. than 10v. So it is pretty much the same as the A11 grade but different in a few small details. It is hard to tell the difference between CPM 10v and BU K390 in the real world in my experience. I like both grades and they are the base line (along with Vanadius 10 and K294) from which I measure wear resistance. The 5 chrome is there to make them all air hardening among other things and does not contribute much to corrosion resistance. It is going to make a killer knife in the new offering and be another classic. Phil”

On my Urban, K390 has proven to be very tough. It is my main travelling folder. And it is a real wolf under sheep’skin. One of the little home test I got is by removing the metal around a bottle of wine’s cork. Most of the time, the knife edge is bent and shows some shining due to miss alignement but not with K390. The steel feels like plastic. On my three knives, the Pingo got the most stout blade and less pointy. This little knife is simply used very hard with zero damage to the edge: digging in wood, cut into staples, scrapping various paints and plastic. So far, even if the steel is not stainless, a mild patina has protected it from real rust.

So what do we got ? A tough blade which keeps its sharpness for a very long time. A forgiving edge which can be used by clumsy hands with no after thoughts.
The side effects are: the need of diamonds and ceramics to keep it razor.
Once convexed to me taste, I use white ceramic and some stropping just to get it mirror. 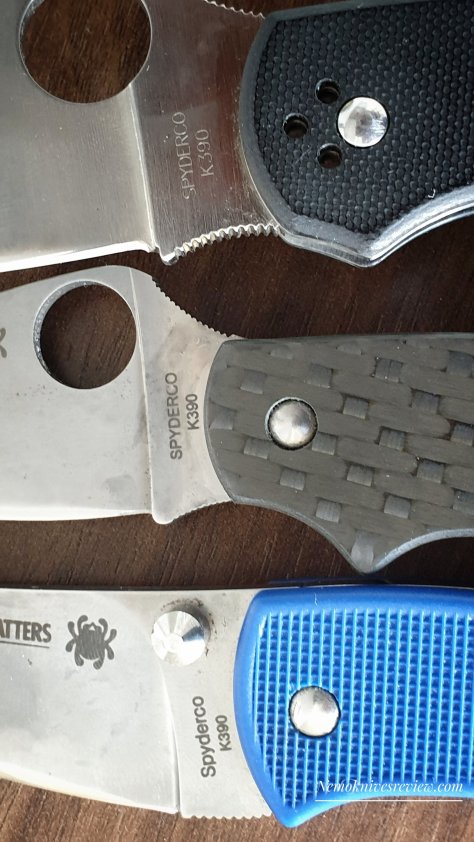 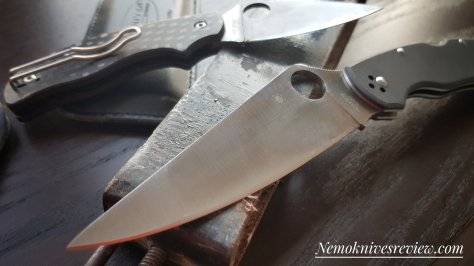