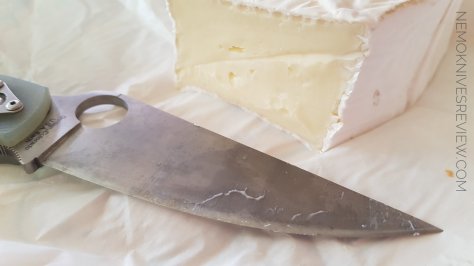 “After building a Patina, coat it with cheese.”

This is an old trick Fred Perrin used to do just un case someone asked him about his knife:
– Is it a weapon?
– Nope I eat a lot of cheese.
But the cheese grease also protected the blade from pitting. Olive oil, butter are also useful to coat you carbon blade. And they are not toxic.

Eating with your knife is solving a lot of issues: you use your knife a lot, you take care of your edge a lot, you display it and people get used to your taste in cutlery. It’s not a Silent Companion anymore: it’s your coming out as a knifenut.

Ok, first picture was only an industrial cheese, it was mandatory to show a real Camembert from Normandie:

(First made in 1791 by Marie Harel, a farmer from Normandie, she had given refuge to a priest who gave her the recipe in gratitude. She first made the cheese for her family, but word spread and the rest is legend. This version of French Camembert is produced in the heart of Normandie.
The velvety white rind encases a pale yellow interior which softens towards the outer edges. The rind has mild mushroom aromas that are well balanced with the saltiness and supple creamy texture of the interior. The flavour profile displays cauliflower and yeast notes, an indication of a real Camembert…)

You don’t need to force a patina when you eat with your knife. Here, tomatoes with vinagar provide an acid environment able to built it. CPM M4 is much slower than Super Blue Steel in getting darker. A catalyst is heat. Hot meat, hot acid dish (tomatoes) will build the patina quicker. Often, meat loaves will add some rainbow stains which once polished are beautiful. 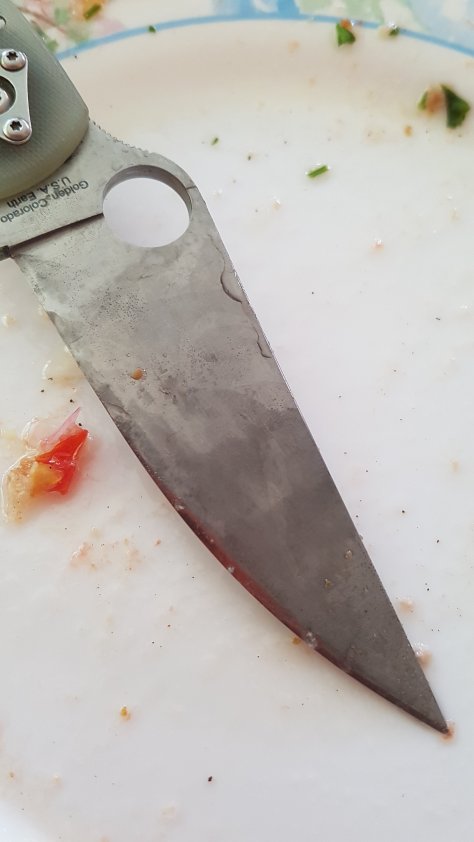 (My father in law used to clean his knife by thrusting its blade in the earth. Old timer did not respect their blade like us. But one thing is sure, they used them for everything. Their edges were often ruined in the dirt or just by scrapping son paints on a tool, but at least they used them hard.)

Cutting an apple pie in a plate will be hard on your blade’s point and edges. But again this is the game of letting your precious EDC goes in other hands. Iy your knife is really the quality knife you claimed, you should be able to clean it and refresh it in a blink of the eye.
Again, I also got bad experience by cutting vegetable in the garden and having dirt and earth ruining my edge.

The point of your knife will get darker sooner than the entiere blade. But this is the signature of a used knife and they are tools to be used.

In the end, DLC coated blades will never show as much as character as naked carbon steel. 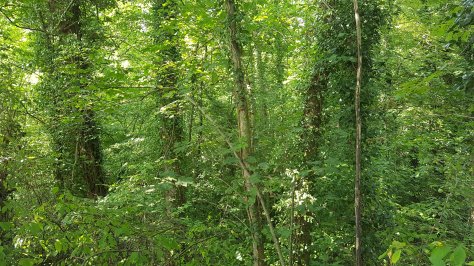 One thought on “Spyderco C36 CPM M4 – Building a Patina”