As you can notice, my Nilakka was developping a gentle convexing ground since JD had the patience to give a decent edge to it two years ago.
But since, JD has sent me another video showing how tough well heat treated S30V can be and knowing how forgiving my Nilakka and my Wolfspyder were after sharpening beyond factory edge… I have decided to put the blade flat on on diamonds and grind it until the convex bevel disappearance. In fact I was very encouraged with my various experience with that Wolfspyder.  S30V heat treated by Spyderco is now back as a friendly steel in my book.

So for one hour I have work on that using a new Double Stuff 2 which I have discovered thanks to Howard Korn from the Knifecenter who gently add it in my last parcel.
The new diamond surface is quite abbrasive and soon the blade was a mess.
But continuing in the same way made the scratches all going in one direction and both side of the Nilakka blade soon were acceptable in term of esthetics. 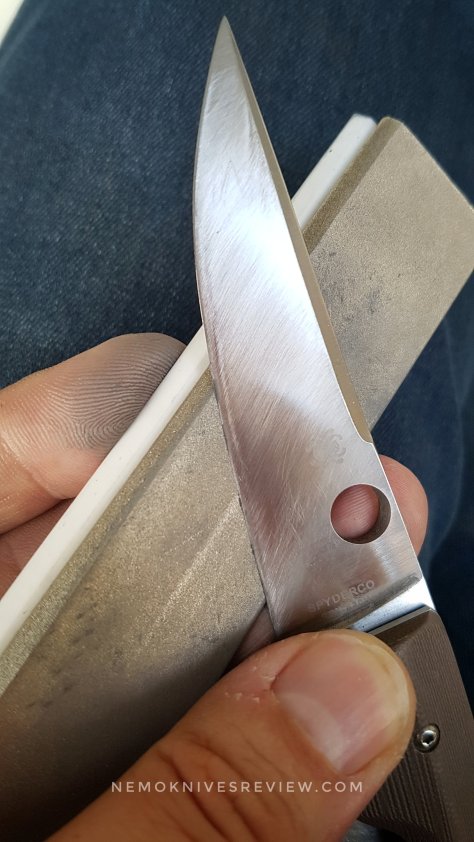 There is a lot of matter to remove and by hand, it takes some time.
But eventually I was able to get some sharpness back with not pressure on the edge while sharpening but an even pressure on all the side of the blade.

After all the Nilakka was made that way, the angle of the thicked stock blade was designed by Pekka Tuominen to be a zero ground edge, with no bevel. 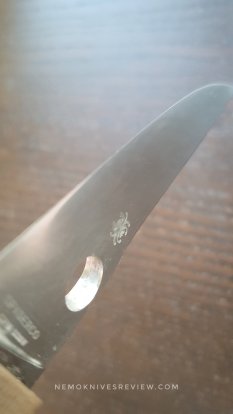 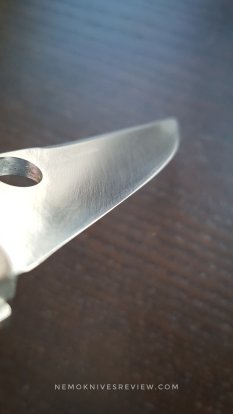 There is still a micro bevel but I’m almost there.
My idea for future refreshing of the Nilakka edge it to do like with my Wolfspyder: like scandi sharpening shown in Ray Mears video…. only using the flat of the blade as guide.

For now I got a razor able to make hairs jumping and been harvested with only one caress.

But also it can stand whittling in hard wood: no chipping or edge warping.
More to come very soon, as I will erase definitvely that microbevel, but I need more time…
“I need more time to make good on the promises I made to the world
When the world was moving slower…” Justin Sullivan.

2 thoughts on “Getting my S30V Nilakka back to Zero Grind.”