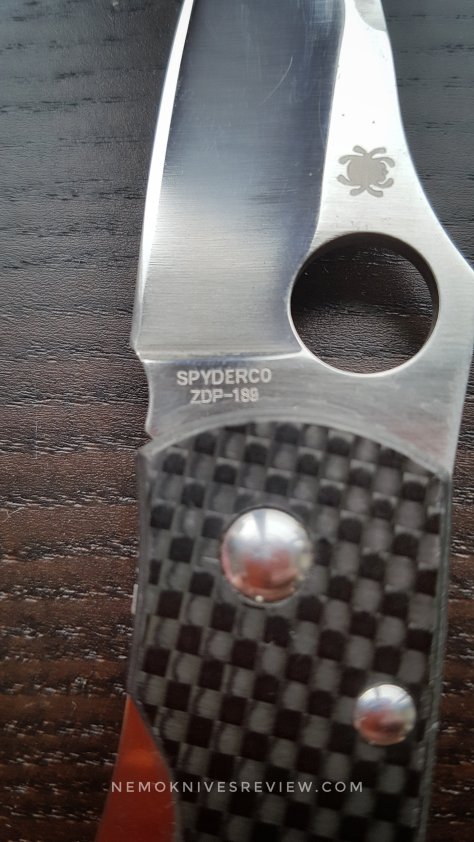 Six years ago, my friend Valter Nencetti took my Walker for a one year mission which turned into a six years journey. It was his favorite knife for hunting and he reported that to me in this article:  https://nemoknivesreview.com/2012/12/30/spyderco-c22-in-zdp189-italian-hunter-update-by-valter-nencetti/ 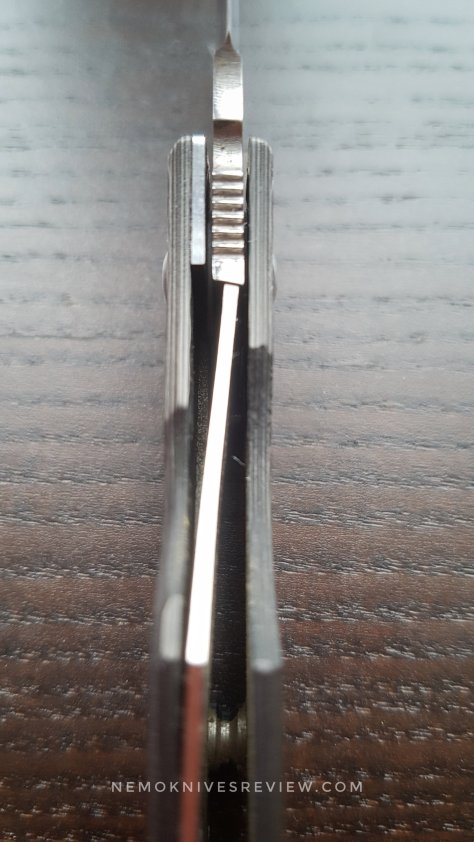 This year, he has given it back to me after I had offered him my Native 5 in 110V which is IMHO an upgrade for Hare Hunting. The Backlock of a Native 5 is a perfect lock for that kind of use, but you can notice the Walker lock as not travel very far. The curved concave notch prevents it to go further.
There is absolutly no play !

For the record skinning hares is not an easy task for an edge as the hairs and the skin are ruining the sharpness very fast. There is a lot of dirt which acts as abbrasive. I have made a video and soon will put it on line. 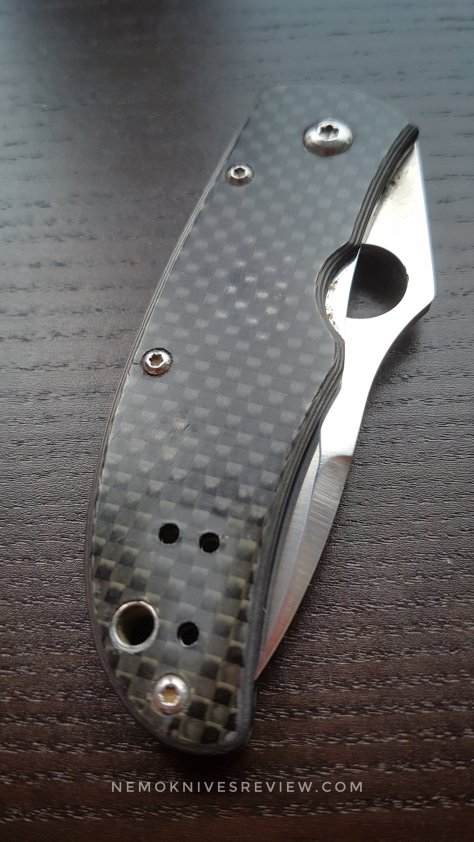 Being used everyday, Valter eventually broke the clip which is a very fragile part of the walker compared to spoon clips used noawadays in spyderco line. You can also see it was not clean everyday and used as an EDC in the countryside of his beloved national Park in the North of Florence in Italy.

You notice the normal wear on the handle but Carbon fibers is incredibly sturdy as an slob material. It can be easily cure with some 1000 sandpaper work.

There were also no pitting on the blade or on the liner lock. ZDP189 is known for pitting strangely with its 3% of carbon and 20% of chromium. But here anyway, no issues.

I have started to clean the marks on the blade with some sandpaper.

Then I have restored the edge to razor. 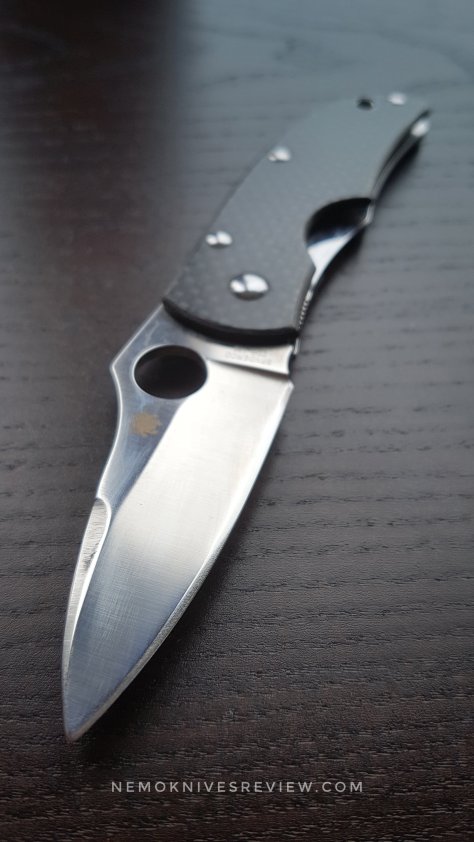 No chipping.
No pitting.
No blade play.
No marks on the handle.
A broken clip.

Valter used his knife with no afterthoughts. I know it was not used on wood but mainly as a skinning tool. It has processed hares but also been used on boars and deers. Also it was used on plastic and everyday mondane tasks as Walter is breeding hunting dogs.

That’s not bad for a little gentleman knife which is a true workhorse. 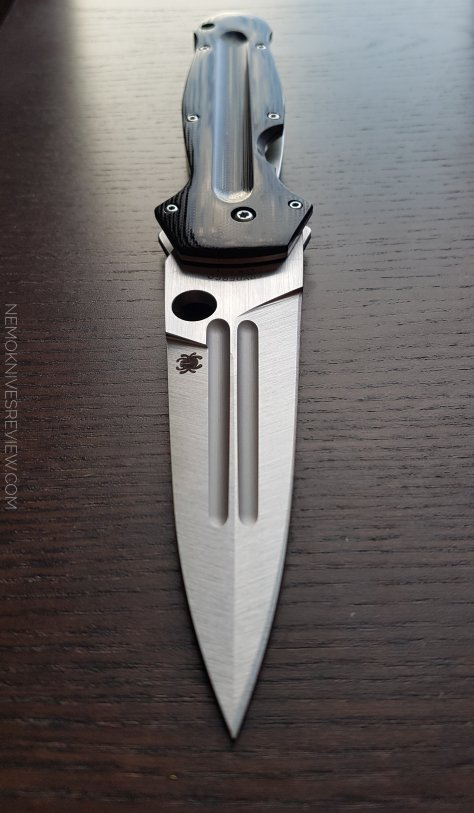 Again this is all made with my smartphone as I’m far from any computer.

A folding dagger as beautifully designed and made is not a bushcraft knife.

But my very first modern folder back in 1993 has been a Gerber Applegate folding dagger.

The first models were made in a stainless steel close to 420Hc.

The Euroedge is made of S30V.

Cutting wood with it is like making chop sticks with a bastard sword: it was not designed for that. The Euroedge is like a weapon a Templar will keep at hand. The blade is massive and the stock is thick.

The handle is so well made G10 feels like carbon fibers.

It is one of the most beautiful Spyderco ever made and a real tour de force in pure hommage to ancient times. 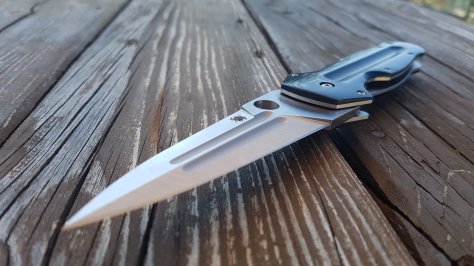 “”I can do anything”, Ed Schempp, will push the envelope, often just to see if he can. I did a “hammer” in at Ed’s house. Just a bunch of knife afi’s with great skill working on a globe. But no hammers. Ed designed and built a series of miniature rolling mills so we can produce mosaic
Damascus pieces, each with an assignment. Ed’s my “go to” guy for Ethnic series knives. Take a design hundreds, or even thousands of year old, capture the purpose and function and re-create that in a modern folder. He studies the design, the history, function and purpose before beginning. Those of you that have studied and used Ed’s designs know what I’m talking about. True original classics, each and every one.”
Sal Glesser. 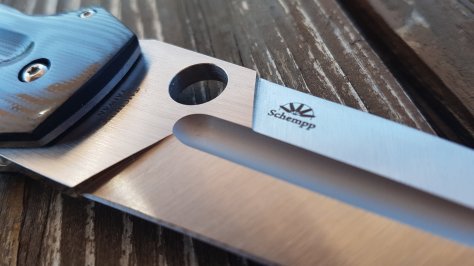 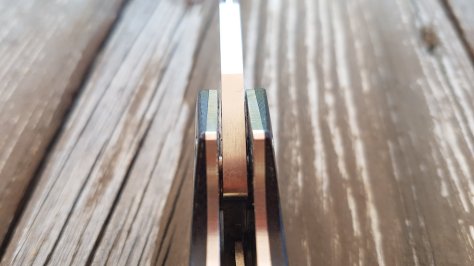 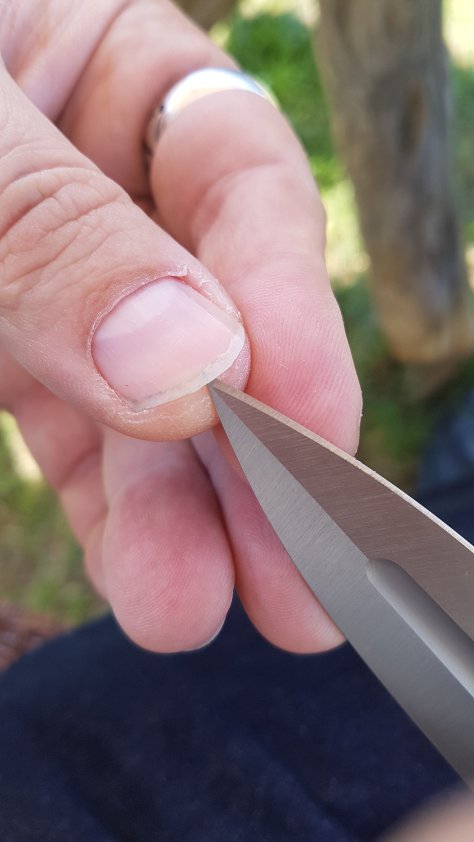 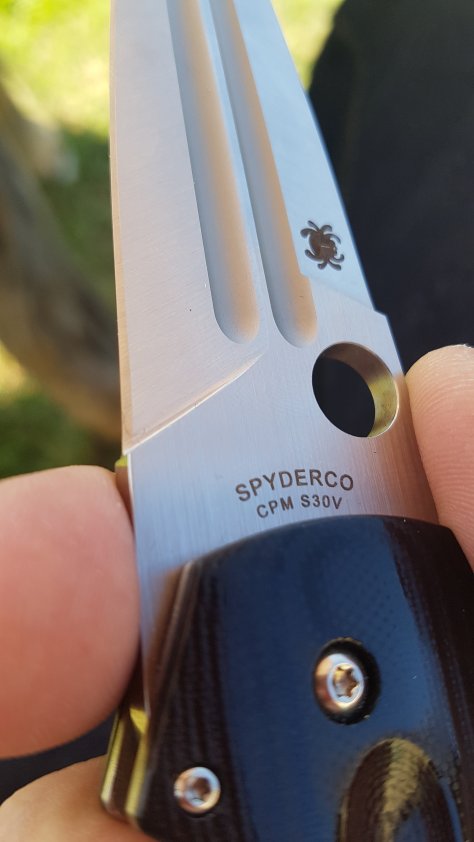 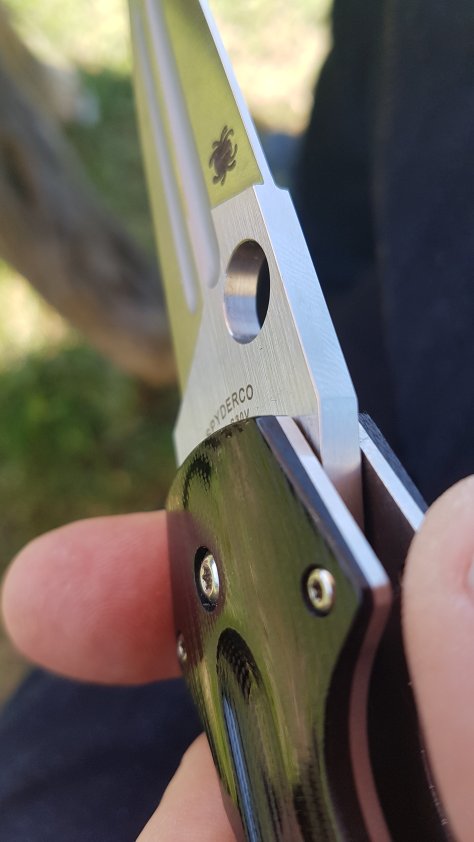 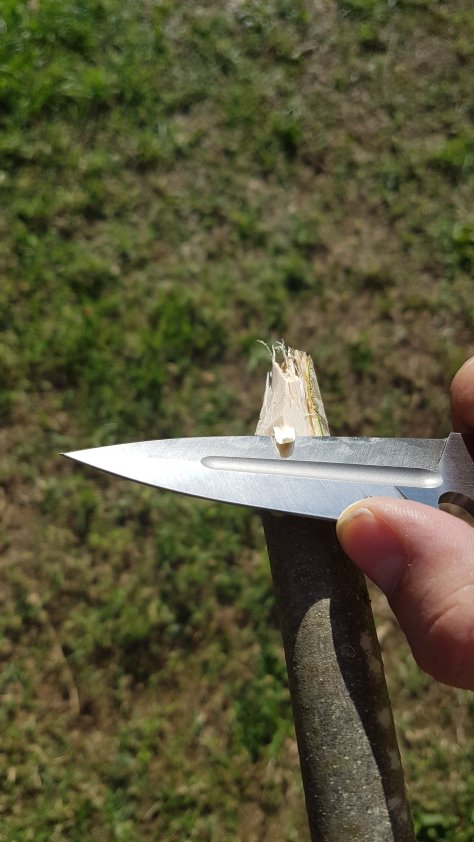 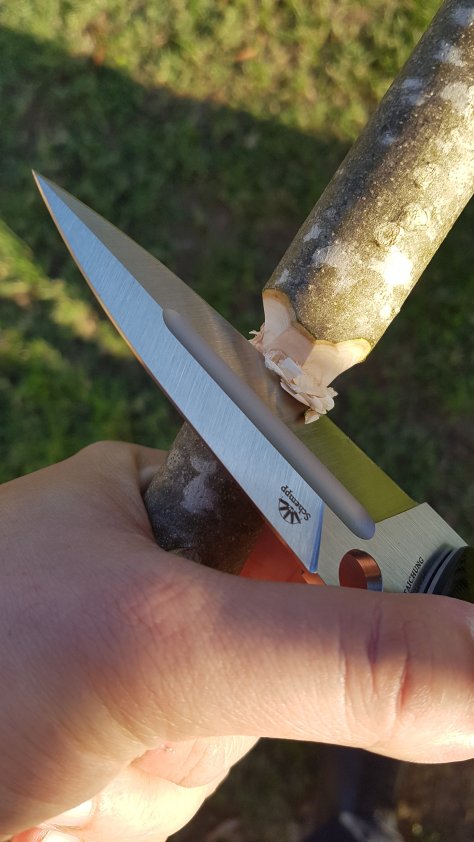 “Israeli knife designer, Eduard Bradichansky, co-mingled the Shabaria’s traditional utilitarian profile into a modern folding knife. Mr. Bradichansky was a gunsmith and gifted jeweler by trade, new to the knifemaking community, but already attracting collectors and enthusiasts to his fresh design work and crafting skills. His career cut short, he fell victim to a terrorist attack on the West Bank.”

Eduard Bradichansky was also behind the design of the clever Spydercard we had reviewed with Fred Perrin back in the 90’s, so when the first Shabaria was released with an ATS 34 blade and a G-10 handle, back in the previous century, we were very excited to test this unique design. For us, it was an evidence: the Shabaria was a weapon and a great one — lean and mean.
The wasp handle or hourglass handle is not a new thing and thousand of people rely on this for eons ! Once you grasp the knife you understand how it works and how clever the design of the Shabaria is. Our was partly serrated and really it was really made to be an Assassin tool.

Now the Shabaria is back in a sprint run with a beautiful carbon fiber handle and a plain edge recurved VG10 blade.
This is a very sexy knife. The blade is saber hollow ground, giving a substantial thickness which give you the identity of the knife: a piercing weapon.
The penetration of the strong and thin blade is remarquable. Also the hour glass handle provides you with an additionnal inch of reach. Yes “mean and lean” are the words which are still coming in mind !

But now, Spyderco is not a company which is making weapons but tools and Eduard Bradichansky was aware of that. The design was inpired by people of the Jordan River Valley nomads. In the Middle East and North Africa, those wasp handle curved knives are sacred tools which can be used in religious rituals as for everyday tools.
My first thought when I was handling a Shabaria was about Franck Herbert’s Dune books and the Crysknife of the Fremen. The Shabaria could be a folding version of the sacred knife of the fremen ! “Long live the fighters!!!” 😉 or better: “Who sees that knife must be cleansed or slain!” !!!

A curved edge means a great deal of cutting power. My Spyderco Dodo is my best hard wood cutter for example. My two Shabarias came razor sharp and my arm’s hairs were flying with just a caress of the edge. Some pass on my razor leather and both knives were upgrade to vorpal status. VG10 is a great steel of EDC. The kind of steel which is forgiving and easy to bring back to peak performances. What the Shabaria’s design brings is a nice belly at the tip of the blade. This is really useful in everyday task. The recurve helps to catch the matter you cut and the positive and negative bellies works like a guillotine.

This is a sprint run and limited edition I was really glad to see. As I thought the Shabaria was long gone and I missed it. The previous version got a lot of screws (six ?) on the handle and this one is refined with only three screw including the pivot. Also that new version got a very nice improvment: now a lanyard hole is available ! I really love those constant research in making the design better and better. The wasp handle is easy to clean with no skeletonized liners and an open construction. Also the beautiful CF handle is anchored in your hand but not with the help of a false guard but just by holding it. This is a very very secure grip ! You need experience it. This handle design is as old as the Old Testament ! Generations have been using them and people who counted on their knives everyday. Hammer grip, reverse grip, pikal grip… everything works because the handle is pure symetry. Again this is the kind of knife which makes me smile once open. This is serious business.
Closed, the Shabaria is also really beautiful. the kind of Syd Mead design for Tron’s lightcycles. It doesn’t scream “knife!” and is a great impact tool ! Because even with the blade closed, the grip on the hourglass handle is still very positive and is anchored in the palm of your hand.

So eventually you got a very unique folding knife with a very strong lock: a variation of the Michael Walker liner lock wich use the height of the handle instead of its length, another clever design from Eduard. The Spyderhole may be more recessed than other designs preventing a quick spyderdrop but as the hole’s edges are sharp it catch your thumb and is smoooooothly open. There is even an hidden choil à la Michael Walker, so once open the blade is really secured twice. Oh and just by holding it open you feel like that very pointy blade is a permanent invitation to pop some balloons ! 🙂
Playing and using the Shabaria is pure pleasure as this is a very reliable design once you understand how centuries in refining can be used and trusted.

The Spyderco Shabaria is a knife with a lot of attitude but also a tool which offers a lot of control during the cuts. I was surprised how its blade was handy for whittling.
This is not only a collector piece but a very serious “silent companion” with design’s roots digging in history of mankind.